Without Purpose of Evasion

As a veteran city manager, Brad Jacks is accustomed to being on the hot seat. He’s not surprised to be buffeted by the political winds as he leads his small California Central Coast city through its review of the most controversial private development project in its history. But the pressure he feels enters another dimension when he learns some little-known incidents of government deception that led to unintended consequences including the worst man-made disaster of the 20th Century. With each revelation, Brad finds himself challenging his long-held beliefs. How can he align his professional responsibilities and personal values with the greater public interest he has sworn to uphold while being mindful of his family’s well-being?

Drawing on the author’s 30-year career in city management, Without Purpose of Evasion, is a riveting, realistic story of government accomplishment born of pure deceit, of the battlefield that is community development, and of a public official trying to sort it all out.

“A fun and engaging novel. The story sheds light on the common struggles people face reconciling workplace demands and personal pressures with their own ethics and values. This is a book for the general public as well as those interested in local government or a career in that field.”

“As entertaining as it is insightful. Thompson’s fictional approach captures the realities facing today’s local government administrators as well as key public issues that should concern us all.

“A highly enjoyable read, woven into a story of the city management profession from a highly regarded retired city manager. The story provides insight into development issues from the public and private perspective, along with interesting stories about some little-known parts of California’s history. I wish I had read this before becoming a city manager.”

“After serving as a city manager for twenty-five years and then working in a consultant capacity with public agencies, it is encouraging to see a leader in the profession translate his experience into an interesting book featuring the city manager craft. Thompson has a thorough understanding of the issues, concerns, and challenges faced by city managers everywhere. Everyone should read it for entertainment and for the window it provides into the exciting field of city management.”

“What a read! The diverse and complex challenges city management professionals face on a daily basis come to life in Thompson's page-turning story.”

“Without Purpose of Evasion is much more than a fascinating novel. It is an insightful and instructive primer on the day to day operations of local government. Students of politics could learn a tremendous amount about the inside workings of small cities from the experiences of Brad Jacks, the city manager of the novel. Most enjoyable!”

Buy the Book from the Author 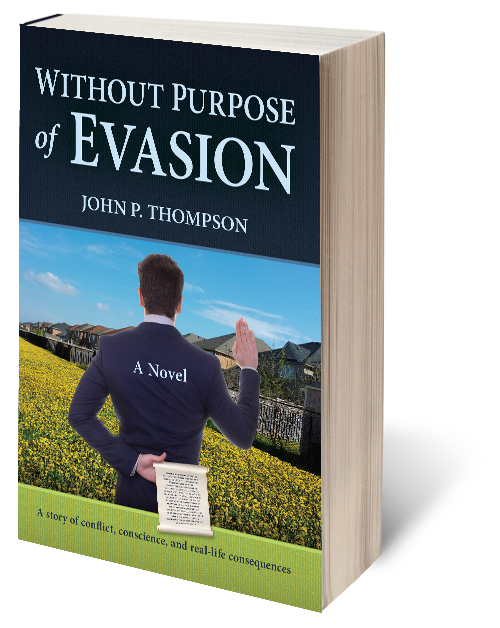